You are here: Home › anti-clown media references › Main Page › Fear of Clowns (the movie!) is now on Limited Edition DVD!

Fear of Clowns (the movie!) now on Limited Edition DVD!

Fear of Clowns is new independent film about a female artist, Lynn Blodgett (played by actress Jacky Reres), who suffers from a lifelong fear of clowns, or “coulrophobia” as it's more commonly known.

Although she has a morbid fear of them, she paints clowns, almost to the point of insanity. Lynn’s phobia is brought into reality when a series of murders occur around her, all committed by a murderous clown named Shivers.

Get a Limited Edition copy of this DVD before it goes live to the rest of the world!
http://www.marauderproductions.com/store-ihc.htm

Marauder Productions has allowed ihateclowns.com to sell some of these DVDs which are signed by the writer/director Kevin Kangas and the lead actor Rick Ganz!

Your fear of clowns is justified. Get the DVD that proves it today!

Get this: ihateclowns.com is mentioned in the movie! 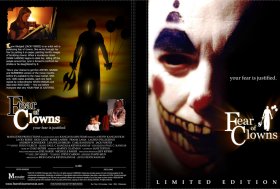 Strictly limited to only 1200 copies!

Finally! Your chance to see the movie being talked about all over the web and across the country!

Watch for my review of the film to be posted in the next couple of weeks.