You are here: Home › Rodney

Filed under: for those clown haters that actually like to be scared

Killer Klowns From Outer Space (link to movie info) was one of the original movies that took on “clowns” as a scary beings.  Although the movie contained alien clowns, people who hate clowns often look back on the movie with a sort of fondness because of how “over the top” it went.

If that describes you or someone you know, be sure to check out the officially licensed t-shirt from the movie that has been added to the ihateclowns store. 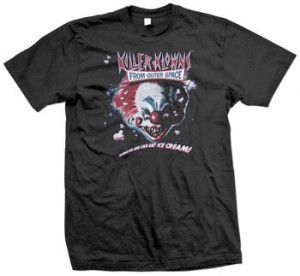 Keep on the lookout for some new original anti-clown t-shirt designs in 2009!

Just wishing a Happy New Year to all new and old friends of ihateclowns.com

You’ll be hearing a lot more from me in 2009, so be sure to bookmark the site or follow the updates on twitter.

On a recent episode of NBC's crime drama, Medical Investigation, the
opening scene showed the agents talking about their nightmares.

Specialist Frank Powell was asked about his biggest nightmare and he said (without missing a beat). “Clowns, man. Definitely clowns.”

Even though my iPod was free, I wouldn't abuse it by dressing it up with this outfit from iattire:
http://www.iattire.net/product_info.php/cPath/35/products_id/75

to maryo for sharing this one with me!

Check out this failed reality TV show called “Kicked in the Nuts“.

It's sort of like Punk'd, but instead of getting punked, you get kicked in the nuts by a clown:

I may be off, but this was the funniest thing I've seen in a looong time.

If you liked the pilot, be sure to check out the second episode.

brought to you by the sick minds of Channel101.com

My Movie Review of the Fear of Clowns DVD

First off, I want to say thanks to the director, Kevin Kangas, for including a quick mention of ihateclowns.com in his movie. It way very cool hearing a cute actress say “w-w-w dot ihateclowns dot com” :)

I bought the Fear of Clowns DVD from the Maurader Productions official website and to be honest, I didn't know what to expect. There's a wide variety in the quality of what people call “independent film”. From “hey-look-I-made-this-with-my-webcam” to just “shy of hollywood quality, with great writing, acting, and storyline” (like Clerks/Slacker).

I'm happy to say that Fear of Clowns fits in the latter category, it is an overall entertaining and well put together movie. The fear of clowns is fast becoming one of the most recognized phobias. Recently, search engine giant Yahoo! ranked coulorophobia (the fear of clowns) as one of the top 10 searched for phobias. Other films have touched on clowns as demons, however, this independent film seems to stand out above them all.

The story behind the movie is that the main character, Lynn Blodgett, an artist, suffers from coulrophobia. Although (or maybe because) she is afraid of clowns, her latest series of paintings all have scary clowns as the subject.

Lynn, played by actress Jaqueline Reres, is going through a messy divorce at the same time her latest series of clown paintings makes it debut at a local art gallery. That night of her showing, a string of killings begin to happen all around her, all perpetrated by a crazed clown named “Shivers”.

This film does a great job of setting up the story and getting you involved with the characters. From Lynn's good looking techy, geek assistant Amanda, played by actress Lauren Pellegrino, to her current love interest, roller coaster tycoon Tuck Flynn, played by actor/producer Rick Ganz, each of the main characters has just enough back story for us to care whether or not they get slashed up, or to make us question their true intentions.

Fear of Clowns turned ou to be part murder mystery, part good ol' fashioned slasher. Throughout the film, I found myself trying to figure out which character was behind Shiver the Clown's horrific greasepaint. At the same time, it had the core elements of a gory slasher movie, with graphic decapitations, a smarmy dectective, and gratuitus nudity.

Having worked in a small town movie theatre for a few years, I personally enjoyed the final scenes that were filmed in an actual theatre. Memories of threading old Christie projectors, movies falling off platters, and tearing down reels of film all came back when the characters were hiding out in the projection booth, trying to outsmart Shivers.

I'm no movie critic, however, I found the only shortcomings in this movie to be the character of the detective who, in the first have of the movie, seemed as if he was too sarcastic and over the top (almost cheesy), and the actual length of the film. The run time of the film is close to 2 hours, and there were a few scenes that could have been edited out to make the film's pace a bit better. In that regard, the film is in good company, because the movie version of Stephen King's “It” was a bit too long as well.

The only other thing I thought was missing from the film was my name in the “thank you” area of the credits ;-) Although I had nothing to do with hard work that went into making of this film, I've always wanted to see my name (or website) listed in the white text on the black screen of rolling credits. I guess I'll have to make my own movie to see that happen :)

For a “low budget” independent horror film, you'll be surprised at quality of this film. The camera work is well done and the production locations/background scenery were well chosen. The makeup and costume of Shivers the Clown was simply amazing. I'm not normally “frightened” of clowns (I just don't like 'em), but Shivers quickly put me in the “phobia” category for about 2 hours. From his offcenter sneer on his greasepainted face, to his costume of work boots, baggy pants and no shirt (except for the clown collar), I was truly creeped out by this clown. I even had to take the DVD off the coffee table and put it in the back of the shelf because the cover art was scaring my wife when she walked by.

So, if you don't mind being scared, head over to the official site for the Fear of Clowns movie and pick up a copy of the limited edition DVD today. Each DVD is personally signed and numbered by the writer/director Kevin Kangas and actor/producer Rick Ganz.

I'd love to see this film make it to the various film festivals. Who knows, it might even be able to snag a few awards. So show your support of independent film and get your DVD today. Maybe one day you'll be able to find it at Netflix!

Lynn: How did you get all these people here?
Amanda: w-w-w dot ihateclowns dot com
Lynn: Wait a minute, if they hate clowns, why are they here?
Amanda: It's a sort of a love/hate thing.

Basically if you like to be scared, then this is the movie for you.